How a woman got back her stolen laptop. 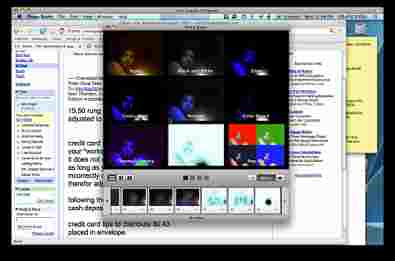 A friend show me a link about a woman named Joey who had her MacBook and iPhone stolen from her truck. Joey got it back by tracking it using one of her Mac laptop's feature Back to my Mac which allows administrators to take full control of machines over the Net. The thief was stupid enough that he didn't format the MacBook. So she was able to track her Mac every time the thief was connected to the internet.

Back to My Mac
The owner had multiple accounts on the MacBook, and at least one of the administrator accounts was tied to Apple’s .Mac service. That enabled the pair to locate the stolen MacBook using Leopard’s new Back to My Mac, a feature that advertises the location of a registered machine to its owner whenever it is connected to the Internet, enabling easy remote access.

The stolen laptop has popped up several times as the thief has connected to various WiFi signals. Even without an ideal network connection, the owners have been able to start screen sharing sessions, access their files, remove sensitive data, change passwords, and even take pictures of the thief using Photo Booth.

It seems the stolen laptop user has a lot of time on his hands, as he sits in front of the laptop for hours on end, and keeps himself busy ripping DVDs and browsing Limewire for downloads, ranging from Apple’s Final Cut Pro to Adobe Photoshop. Despite his changing the primary account and password on the laptop, the owners were able to continue tracking it using a secondary account linked to .Mac.

Thief Identity
Within a couple days, the owners were able to assemble a full profile of information on the stolen laptop user as he signed into a hookup sites, read his Gmail messages, and shopped on eBay for… a police scanner. They discovered his birth date, mother’s maiden name, email address, Comcast IP address, and were able to use Photo Booth to take a snapshot that was clear enough to read the lettering of his tattoos.

Santa Cruz police have initiated a warrant and subpoena process, and hope to bag the burglar and return the stolen equipment shortly. A detailed accounting of the their progress is being documented by Joey, the laptop tracker, in a LiveJournal blog.

Very cool though but what happen if the application was compromised? Would it be really safe to have this feature?
Another similar application which I know that is built for mobile phone called WaveSecure.
It is a stealth application that you can't see it from the add/remove programs. This will help you to monitor your phone and also backup the thief's contact and information if he/she put uses their sim card and slot it into the phone. I didn't sign up for this application for my pda as I'm not sure yet if its safe to backup my stuff to reside on their server and also didn't have the time to explore. Anyway there is no password stored on my pda, no harm trying one of these days.

Digitised by JohnnY at 1:42 AM