Gosh man this is so hilarious. Just take the joke lightly and watch the trailer. :)

Digitised by JohnnY at 1:17 AM No comments:

Few months ago I blog a post on a robot that can solve rubik cubes, this had led me into great interest on exploring more on robotics which eventually put me into another expensive hobby. On exploring more on affordable and customisable robots, I have made my decision on getting Lego Mindstorms. Reason being its affordable, customisable and even programmable using Microsoft Robotics Developer Studio R3 which they are now giving free! :) I went to my local retailer and found out it has been out of stock for quite sometimes. The only place you can find is from the Toy 'r us which cost like 499?! Instead of getting at that price, I went online and get it which was much cheaper 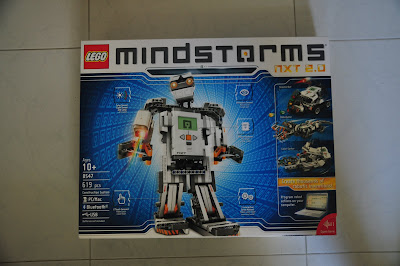 As the box stated, you can build your first robot within like 30min and get it programmed in 1 min if you can understand how programming logic works. So for my first robot, which I named it 'Robby' ~_~, I follow the instruction and set the NXT program(preset commands) from NXT Brick(The main controller unit) which you can give only like 5 instructions to tell what the robot should do. So I just simply set Robby to move forward once it started and if (sensor touch) hitting any obstacle in front will move backwards and loop the instruction again (4 instructions).

On My next demo, I will rebuild robby using the development kit provided by Lego and send instructions to robot to understand more on its behaviour what it can do.
Digitised by JohnnY at 11:53 AM No comments: